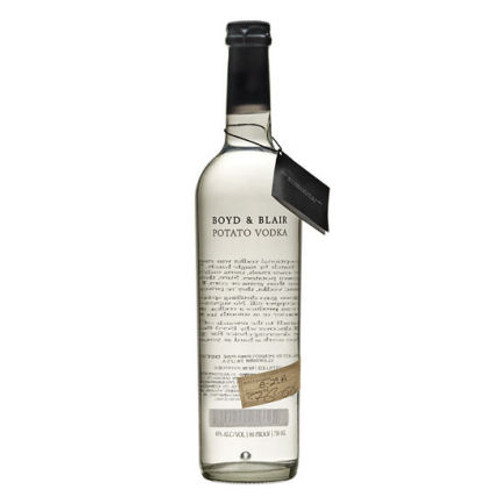 Spirits Journal Review
5 Stars
Wow, this aroma comes flying out of the glass in waves of white potato, starch, and parchment; seven more minutes of aeration don't greatly alter the aromatic profile, but there is a noticeable deepening of the established scents, especially the raw white potato element. Entry is nothing short of luscious, semisweet, chewy, and smooth; midpalate adds cocoa bean, maple, and honey. Aftertaste is graceful, solid, and simply delicious. The best small-scale vodka I've had since the 45th Parallel. So sumptuous and tasty that it's spectacular tasted neat. Best non-Polish vodka available. AWESOME ACHIEVEMENT!

Tasting Notes
Boyd & Blair Potato Vodka is made batch by batch from original mash using only locally grown Pennsylvania potatoes. Each batch is hand crafted in a 1,200 liter copper pot still using only the "hearts" of the run. Every bottle is filled by hand, corked and dipped in wax. And each and every bottle is batch numbered and personally signed by Barry Young, the still master. This is a classic vodka meant to be savored one sip at a time.

Same cocktail, new look and name! This anything-but-average Iced Tea & Lemonade is made with premium

Same cocktail, new look and name! To make this artful expression of citrus and herb, we source selec

The availability of this product is limited and subject to change.This vintage offers gorgeous, pure

The availability of this product is limited and subject to change.Wine Tasting NotesA blend of 70% C

Brancamenta, the unmistakable mint-flavour liqueur, gives you an intense pleasure thrill at every si